“L'Arco - in - cielo” is located at the beginning of the crags, in the wildest and deepest part of the Negombo park. It is located across the path of the sun and emphasizes its birth and sunset. The cryptic and mysterious writing of the Arc, made up of edges, broken lines, points, triangles and wedges, unfolds and changes continuously, with the same slowness of the path of the sun. The play of shadows and lights enhances the lines and shapes that make up the arch and that overflow and break the regularity of the tiles and of the arched curve itself. A wedge-arrow opens the narrative; two crossed arrows pointing inwards close it. It is a time-path that gathers on itself and can be read in its two senses or in the opposite direction by those who cross the threshold arc.

Speaks about the current human condition. So anyone who passes or stops can find written on the arch, in an unknown language, his story, the one of others and recognize himself. An arch, moreover made in ceramic, innovates the idea of the door, broadens its senses: the door is no longer just a portal and opening, but it is a threshold, which is transit and stop, or even a line of union and separation between the things. The threshold is in fact the border line, which the ancients expressed with the figure of Janus, the power of two faces, with a third mysterious hidden face that corresponds to the mind's eye of Shiva. Thus the Arch combines its color and its shape with the many colors and shapes of the garden and the sensuous and Dionysian terrestrial nature of the place, adding an excess of meaning, which is typical of the human creative gesture, with its visionary eye.

The first exceptional stimulus for an arch came from Castellamonte (Ivrea) in the summer of '95 on the occasion of the Ceramics Exhibition. I was interested because Castellamonte is famous for a very old tradition of making ceramics. And the artisans were so skilled as to transfer my "writings" (which, as you know, were first and foremost inspired by those of the archaic, numerical Mediterranean) into their terracotta. In Castellamonte they generously gave me the opportunity to create another version for the Negombo hydrothermal and marine park. I was already aware of the work that the landscape architect Ermanno Casasco has been carrying out for almost a decade in the park (I have also worked with him in other places). And it was him who proposed to me to design an arch for Negombo as well. In fact the curvature of the very wide arch (10mt or 32.80ft at the base and 5mt or 16.40ft in height) encamps perfectly among the trees - almost competing with their height - in a park, in the sky, with its value as a “wide open door”.

I offered to the management and friends of Negombo the second arch in due recognition of the work done in that landscape. "L'arco - in - cielo" - created by Roberto Perino and Silvana Neri, in his laboratory in Castellamonte - where the famous stoves are produced - presents the addition of copper in the terracotta for its protection value from bad weather and storms of sand and saline infiltrations, but also for its green color. The specific differentiation of this new sculpture in 31 tiles or slates (like the days of August) is first and foremost that technique that I have already specified; moreover, in the wonderful hydrothermal and artistic park, it is drawn, with the presence of the arch and color, a green segment that gives a broader sense than the aesthetic and monumental one: because it collects and properly carries out the "spirit of the place". 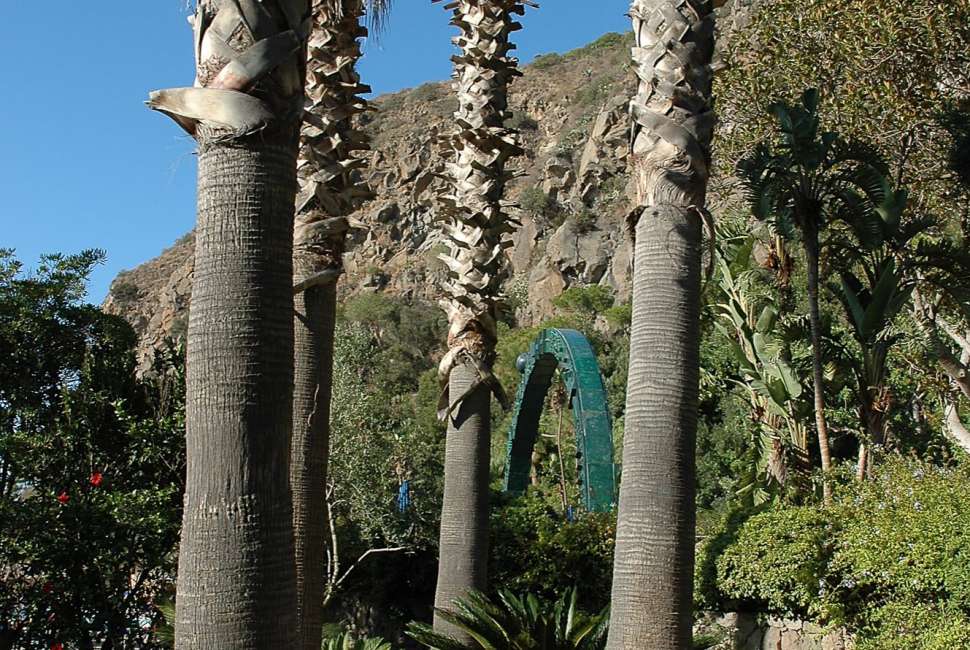 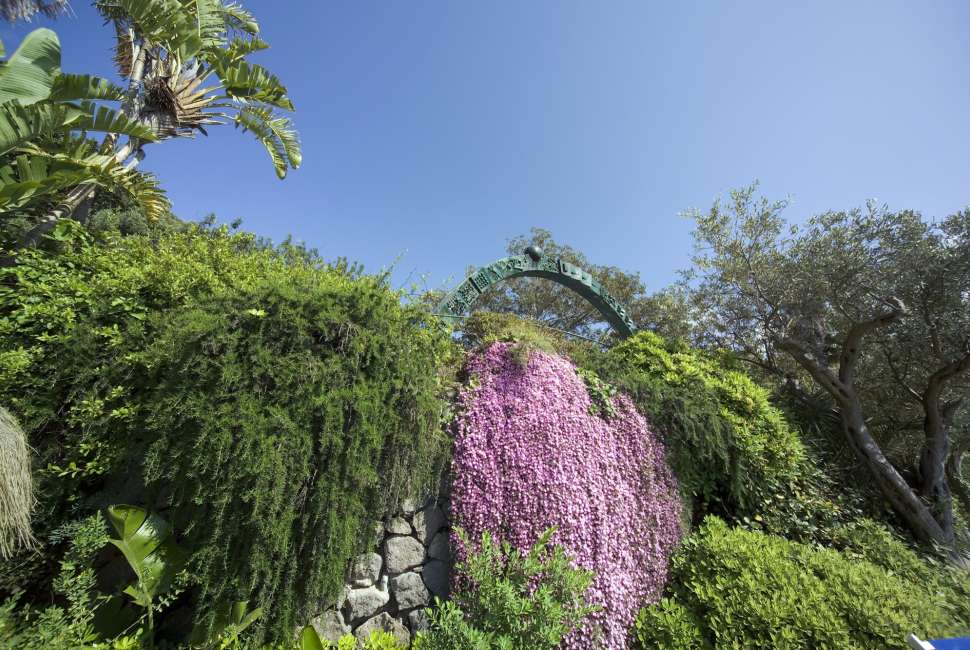 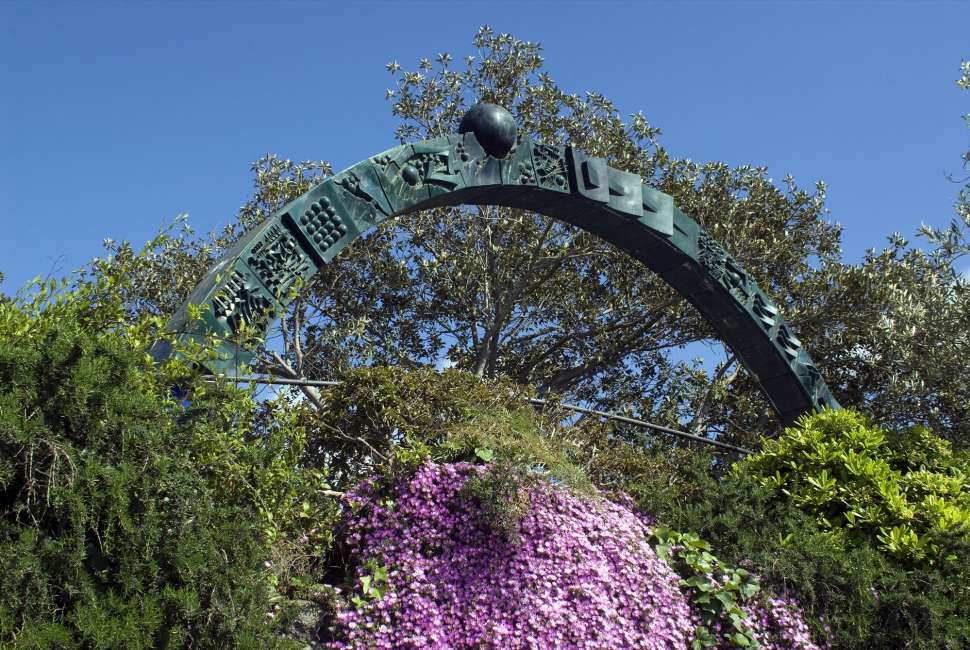 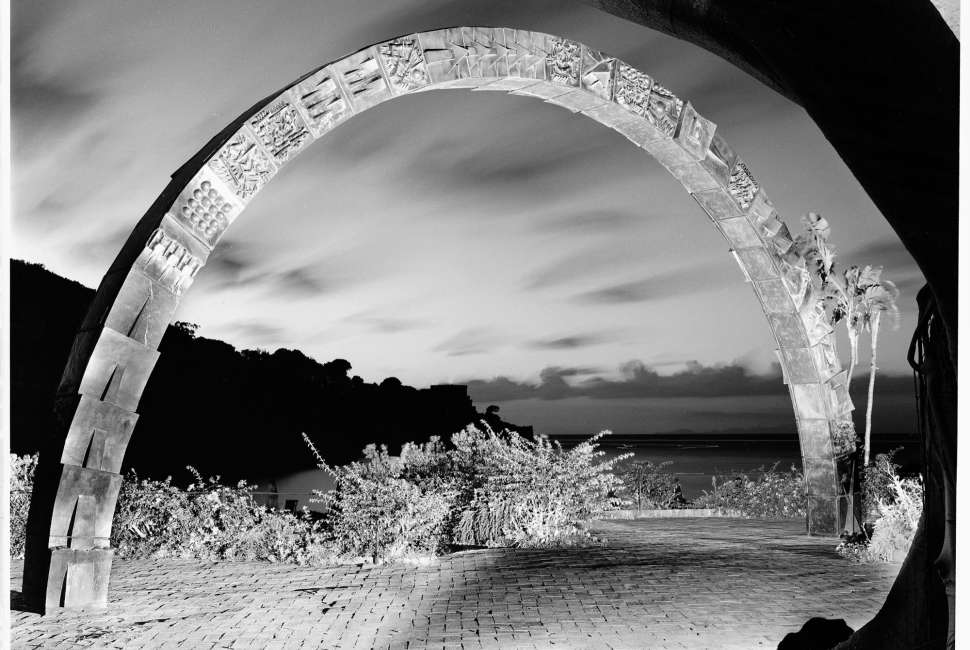 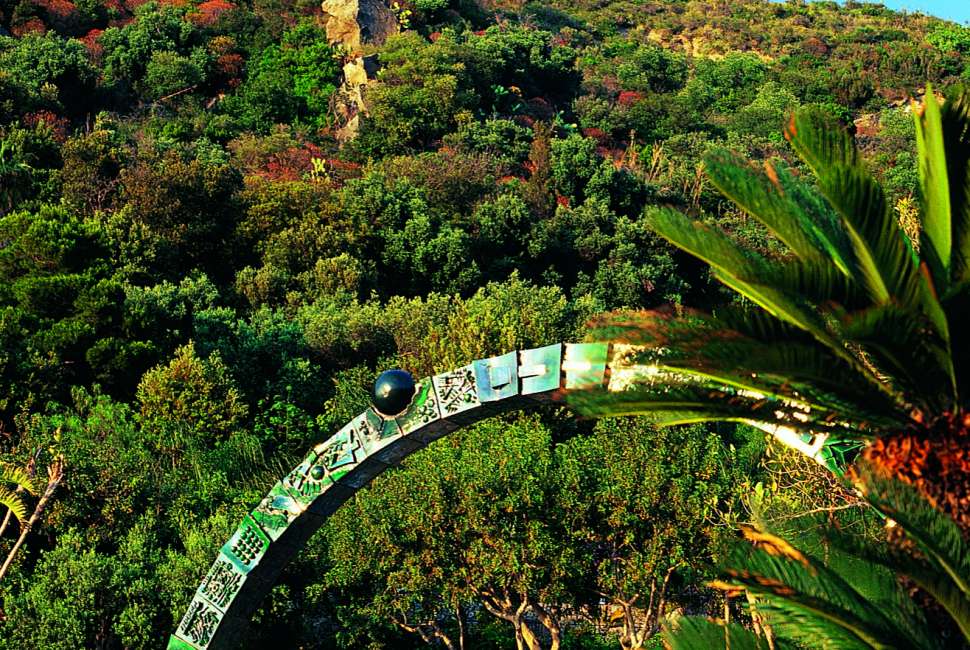 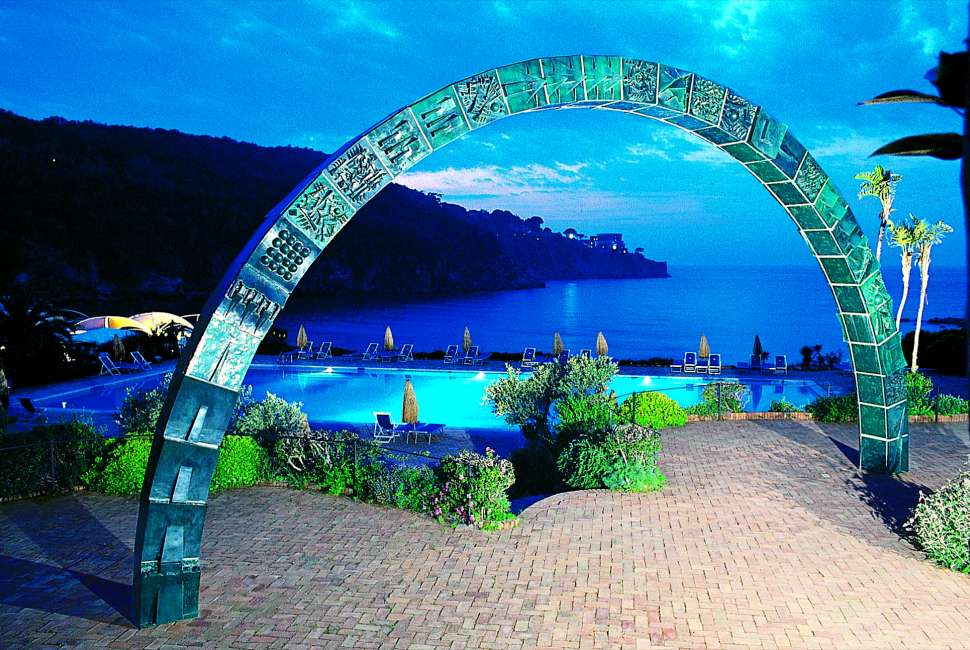 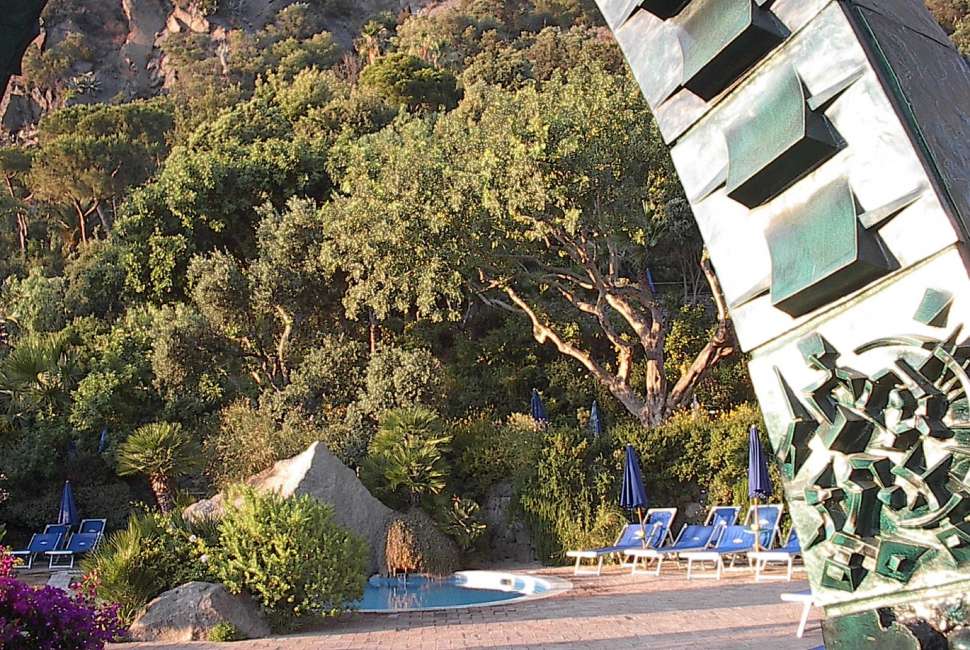 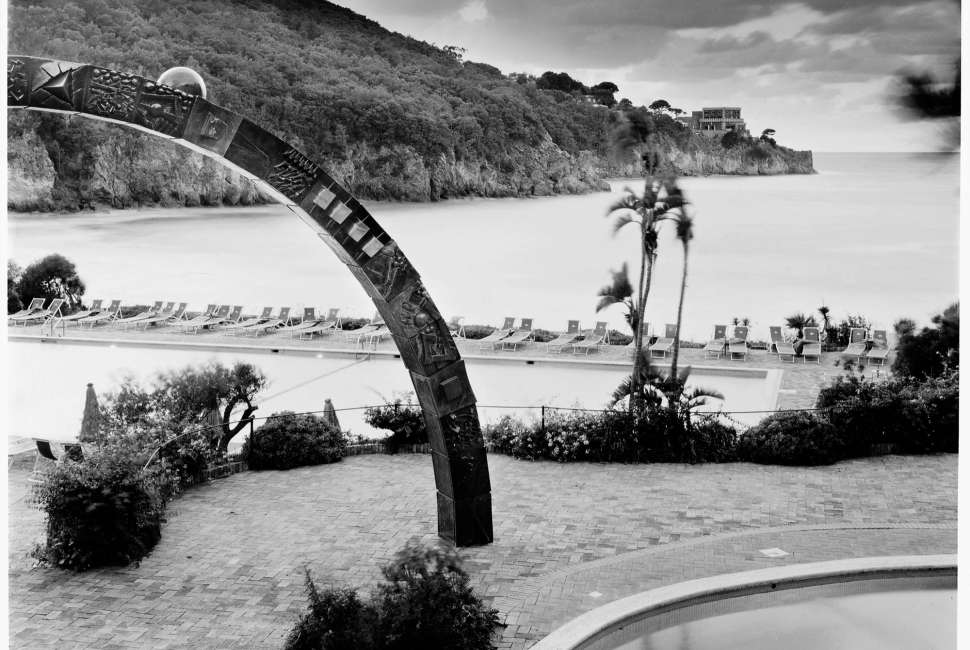 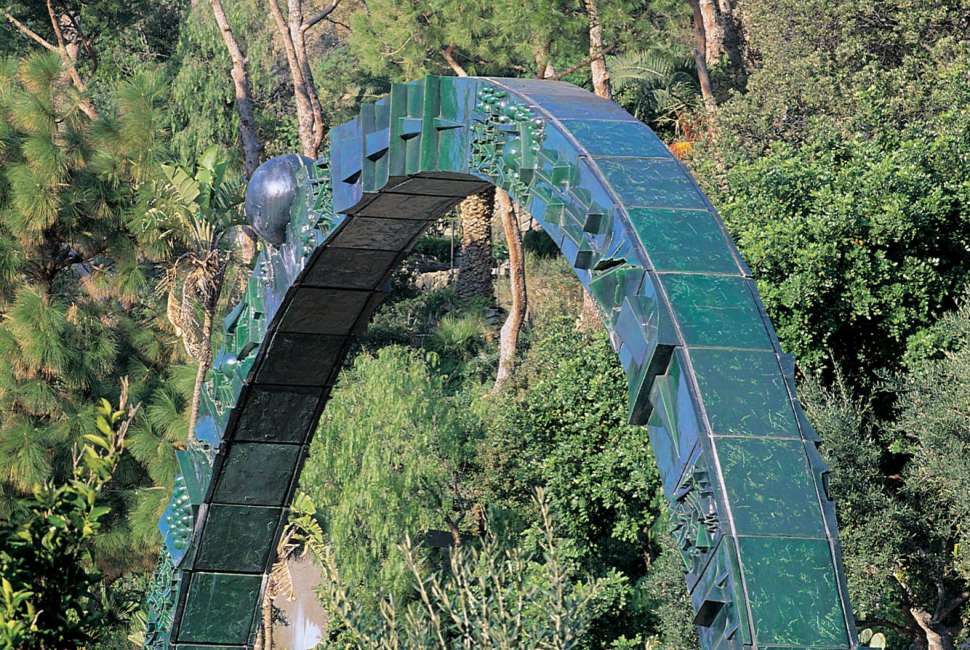 It is a tribute to the sea. The sea that preserves Time and History within itself. Hence the mention of the cuttlefish bone which is a primeval find of nature to which I owe the vitality and materiality of my surfaces.